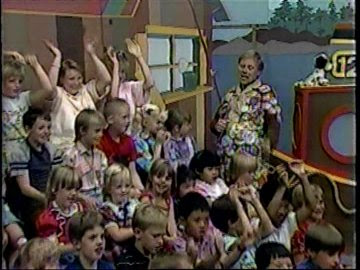 My first TV appearances were on “Ramblin’ Rod,” a children’s cartoon plus live audience morning show. The kitschy show was interspersed with Popeye and Looney Toons cartoons, but the gold of the show was the chance for local kids to be seen on TV throughout and southwest . The kids would have an opportunity to introduce themselves on camera, and say what city they were from. The luckiest kids were asked a lame question about the city they were from. (Tualatin is the home of the Crawfish Festival, btw) Rumor is that Krusty the Clown is said to be loosely modeled after Rod, considering The Simpsons creator Matt Groening is from . The closest thing I could compare it to is Stanley Spudowsky’s Clubhouse on the movie UHF. My dad worked at KPTV channel 12, and knew Rod. He would usually give me a little extra camera time and I could tell a joke or say that my dad worked for the station. His trademark attire was polyester pants and a cardigan sweater covered in buttons and lapel pins, all gifts from admiring kiddie-fans. Kids with birthdays would get to stand in front of this big wooden tugboat, hand him a pin, announce their age, and Rod would make a comment like “Seven is Heaven!” or “Eight is Great!” Then all the kids would sing along with a pre-recorded soundtrack of the birthday song. (if you watched at home, you could follow the bouncing ball on the screen to follow the lyrics)There was a smiling contest during every show, where hokey music would play and the camera would pan the children in the audience for about a minute. The camera guy would then get to choose a few kids out that had the best smiles, and get a prize. One kid per day would get the SUPER SMILE WINNER prize, which was usually a free pizza at Chuck E. Cheese. I can recall at least two times that I won the super smile winner award. I’ve got a great smile, but the victory probably had something to do with my dad being friends with the camera guy. Hopefully in my upcoming move I’ll uncover my VHS recording of my last appearance on Ramblin’ Rod, with my 7th grade friends for my 13th birthday.

Ramblin’ Rod was on KPTV 12 for over 30 years. He passed away in 2002 at the age of 69. For more info on this delightful part of my childhood…click here.