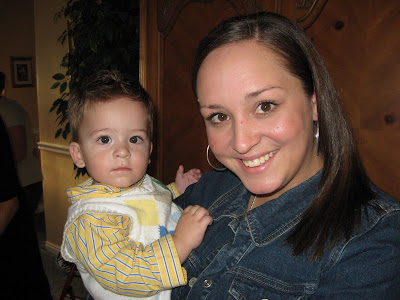 Last week, Taylor and I were listening to his new Zune (I’m such an awesome wife for getting him what he really wanted for once). “Pretty Friend” by Frente came on, and Taylor said “Wow, this song really reminds me of 2001.” I burst out laughing. My cousin Susan and I used to listen to Marvin the Album by Frente over and over in junior high in 1994. Granted, it’s only a 7 year difference, but there’s a big maturity difference between 8th grade and early adult life.

A lot of my teen-year music choices were influenced by Susan. One of my favorite memories with Susan is having her sleep over and my house, listening to one song at a time, over and over. The ones I recall most vividly are “One” by U2, “Black Hole Sun” by Soundgarden, “Stairway to Heaven” by Led Zeppelin and “Fast Car” by Tracy Chapman. She made me listen to Pearl Jam, Stone Temple Pilots, and other stuff from X96. I made her listen to The Beatles, They Might be Giants and 80’s New Wave stuff that I discovered from Randy (who deserves a full blog post of his own). Sometimes our cousin Mark from down the street would sneak in my bedroom basement window and listen to music with us till the early morning hours.

Susan and I were born 10 days apart. For our young years, I lived in Portland and she lived in Salt Lake. I was always excited when we’d visit Utah because I’d get to spend time with Susan. She is one of the coolest people I’ve ever known. She is stylish, outgoing, intelligent, and beautiful. I think the only way I handled my family’s move to Utah by knowing that I’d finally be living close to Susan. We went to choir concerts and stake dances, on drives up the canyon, and shopping at Fashion Place Mall. We worked together at her dad’s optometry office. We always kept each other informed on boys we liked, boys we kissed, and boys that wouldn’t leave us alone. We got married the same year. We were pregnant with our daughters at the same time. She just found out she’s pregnant with her 4th baby, and I’m so excited for her. She keeps me company on MSN messenger when I’m lonely at night. And she’s a great friend. I love you Susie-Q!