Skip to content
Saturday was our “touristy” day. We had a lot to see, and only one day to do it in. We grabbed breakfast and lunch from Tesco, and headed for the Tube. We started at Buckingham Palace. We arrived 45 minutes before the Changing of the Guards. After about 10 minutes, the crowds were so unruly that we gave each other a mutual “Are these crowds bugging you as much as they’re bugging me?” glance. We decided to walk around the attractions nearby and see how the crowds were as the procession started. 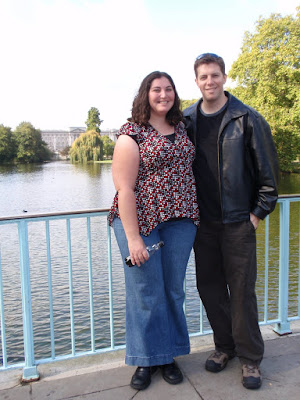 We listened to a few songs by a military band. The highlight was a orchestral version of “One Moment in Time.” The epitome of British culture, let me tell ya!

And now a word from our sponsors…

One of my product placement photos (I’ve got a few more on Facebook) I thought it was funny that the Dr. Pepper Zero was “sweetened with vegetable extracts.” It tasted less sweet than Diet Dr. Pepper. Coca-Cola owns the Dr. Pepper licensing in the UK, thus the “zero” brand name. UK Coke was awesome – sweetened with cane sugar, not HFCS. So was Pineapple Fanta. Lilt was pretty good, but too tart for my taste. I HATED the Diet Coke with Cherry….tasted like rancid cough syrup.

Houses of Parliament (aka Big Ben). I thought it was the most beautiful thing I saw on the whole trip. It sounds to touristy cliche, but it really was ornate and spectacular. The photos just don’t do it justice.

Waiting for our boat ride down the River Thames

View from the Thames

The dome shaped building is called “The Gherkin.” I also heard others call it the “Towering Innuendo,” and the “Crystal Phallus.” Definitely one of the more modern buildings in the London skyline.

St. Paul’s Cathedral was the only paid attraction that we did on the trip. We were tempted by the London Eye and a double-decker bus tour, but I don’t think anything we could have done would have been as awesome as St. Paul’s. We toured several parts of the cathedral, and then started our trek up to the dome. After 250 steps, you reached the “Whispering Room.” 150 steps later was an observation deck with this gorgeous view:

We ascended another 150ish stairs to the observation deck at the top of the dome. I was huffing and puffing, and very tired after all those stairs, but the view was definitely worth it!

Coming down was much easier!

We crossed the Milenneum Bridge to Tate Modern. We looked at exhibits on two floors.

We also saw the replica of Shakespeare’s Globe Theater

View from the top of Tate Modern towards St. Paul’s

Our legs and feet were aching by this point. The closest tube station happened to be closed, and we couldn’t figure out which one to walk to. We ended up walking about 25 minutes to Waterloo station, and I felt like I was going to collapse (Yeah, I’m out of shape. Not used to walking 8+ hours in a day) Our last “must see” stop was Trafalgar Square…and that’s where we went.

We got dinner at a pub called Garfunkels. Taylor got fish and chips, I got a chicken and mushroom pie with mash. For dessert, we had bread and butter pudding with warm custard.

We got one last view of the Square, and headed underground to go back to our hotel. We had about 30 pounds in cash left at this point, so we went to Tesco to pick up some sweets and souveniers to bring home. Chocolate digestives, Bird’s custard, Smarties, KitKats, Fruit Pastilles, Jammy Dodgers, and Aero bars. I cannot even describe the look on Taylor’s face as I kept piling sweets into the basket.

We got back to our hotel, and went into the Business Centre to use the internet (20 minutes per pound) We needed to check flight loads, and come up with backup plans in case our Heathrow to Atlanta flight fell through. In this process, we realized that our flight wasn’t going to be free…we’d have to pay the taxes and tariffs to get back into the US. That increased the total price of our entire trip about 30%, but we still completed it all for less than a one-way ticket to London would have been. We are so grateful for the kind friends and family who allowed this trip to happen….and that’s where most of this candy went to.