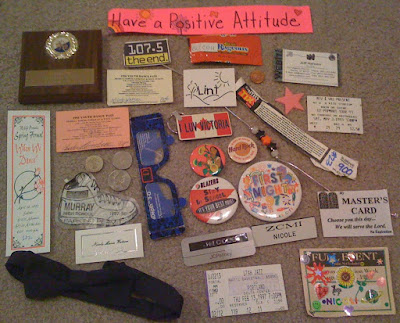 I have been having a blast going through my old boxes of high school stuff. Pictures, ticket stubs, notes, old research papers, choir programs, mixtapes, and more. I’m an admitted pack rat when it comes to nostalgia, but there were some true gems in this box.

My favorite find was this letter from a boy that REALLY REALLY REALLY liked me. As in creepy-stalker-like. We met over the summer at an extra-curricular service project, and subsequently attended a leadership conference at USU. The next weekend, I accepted an invitation for a pity date. He took me to Stansbury Park Observatory, in which we sat in the back seat of an old pimped out Cadillac, driven by a 20something Hispanic buddy. It was a courtesy date in the first place, even creepier when he showed up with a chauffeur, and creepiest when he lunged toward me and started sucking on my neck on the way home. This letter was in response to the event.

Dear Nicole,
In case you were wondering, that letter that I wrote for Larry*, I also wrote a letter to you, though not nearly as gaudy. Within it were questions, that I felt only you could answer, concerning that night at the observatory!! But, I was talking to Larry* about the note, and he said that he let you read it. He said you told him not to tell me, though he told me anyways. Don’t be mad at Larry*, he still doesn’t know about how I asked you to go “skinny dipping.”

He said that when you found out that the letter was written by me, you rolled your eyes, when he told me this, it triggered an emotional spark, I thought that you were disgusted by my work, and thus tore the note to you into pieces innumerable, and threw them away. I regret that action, for the note was serious, and I have been in a downward spiral ever since that event, in fact, as I write this, I am almost certain that you are disgusted by the fact that I wrote you, and also feel that you will never read this note, due to the fact that you have shreddid it, and then probably incinerated it. So, I am probably wasting my time.

But if you’ve actually succumbed to your curiosity about what is written in these pages, then I will ask the questions that I meant to ask. I was wondering why, suddenly, I have gone from intriguing to revolting. I felt that you used to enjoy my presence, I felt that there was a sense, if only a little, of loss when I was absent. But after that night, things changed, dramatically. I have several theories on the matter. One is, when I kissed you, you found it disturbing, even the thought of such a vile creature touching your face with it’s mouth, revolting even to the point of nausea. Another might be, that you wanted me to kiss you, but sooner, and better, and more intensely. Which leads to the conclusion that my hesitance was the downfall of whatever we had built, my ignorance was the cause of it’s destruction. And then the most unlikely, when I kissed you, it triggered an emotional response, which triggered a memory of your lost love, and you did not want that to happen between us, so you stopped us from going any further.

Anyway you look at it, I am the louse. but I truly need to know my mistakes, so that I don’t destroy any more relationships. You probably consider me a coward for not confronting you directly about these issues, the reason for that is, I didn’t want to see me cry, and every time I think about my actions I feel guilt, and if I talk, my words stumble, and if I talk about it, I rain. I may actually confrunt you on these issues in hopes that you may answer. I need the knowledge that you have. I would also like to know, if we did it all over again, how would you want it to happen? And, if we were to try again, would you try to forget what had happened? I don’t wish to WASTE anymore of your time with meaningless babble.

With love and apologies,
Felix*

!!!Sorry to bring up bad memories

*names changed to protect the guilty. All spelling, punctuation, and grammar errors intact. And NO! I didn’t not go skinny dipping with him. Ew!
(circa August 1996)