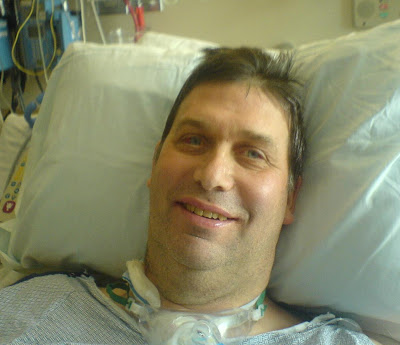 I could not believe the progress my dad has made since the last time I saw him. His body isn’t swollen and bloated, there are less tubes coming out of him, he is able to force-talk through the trach, and he’s done with the ventilator. Unfortunately, this morning he pulled out the NG feeding tube out of his nose, which is bad because he’s not getting nutrition or a route for medication in pill form. This afternoon they will be doing a swallow test, and if he does okay, he will be able to start eating and drinking. Tomorrow or Friday, he will have another surgery on his leg to make sure that the tissue is healthy and not infected, bloodflow is good, cut down the bone, and sew it up with plastics. After that surgery, he’ll have the trach removed. Next week he’ll have surgery on his other leg to repair the knee.

I met with the rehab case manager, who said the doctors have ordered no weight-bearing activity for 6 weeks. She said that acute rehab could be done through the hospital, where willing caregivers would be trained in proper caring and lift techniques. She said the better option would be up to 6 weeks in a rehab facility. He says he really wants to come home, would not be a viable possibility unless we had many, many willing caregivers to take shifts every two hours for 6 weeks. We’ll have to play it by ear and explain to him why we can’t take him home through the ICU psychosis….and how the tray table is not a wheelbarrow to take him home in.