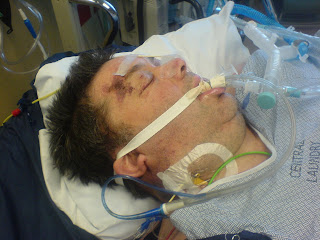 Yesterday, Taylor, Rosie and I flew back to Detroit. We left for the airport around 6:00 am, but due to layovers and a 2-hour delay on the ground in SLC, we didn’t arrive back until 5:00 pm. We’re pretty exhausted, and Taylor leaves on a 4-day trip this morning. I wish he wasn’t going to be gone. We get our apartment keys on Friday, and the moving truck comes Monday.

As for David, his status continues to remain the same. He’s had a temperature around 102 degrees for a few days now. They use fans and ice packs to keep him cool. His vital signs have remained steady, but he is heavily sedated. I don’t think his lungs are quite as bad as the RT who signed him up for the albuterol protocol led us to believe. There are some crystalized parts of his lungs, but the vent protocols are going as expected. The lady from the wound team looked at his leg and said part of it looks “dusky”, which means there hasn’t been adequate bloodflow to that area. Thursday he will go into surgery with Dr. Merrill and his resident to work on his leg. They will take out any necrotic tissue, assess his muscles and take out any part that has died. This surgery will give a good idea on what the long-term prognosis of his leg will be. Now the time estimate is for him to be in Shock-Trauma for up to two more weeks.