Checking in from ATL 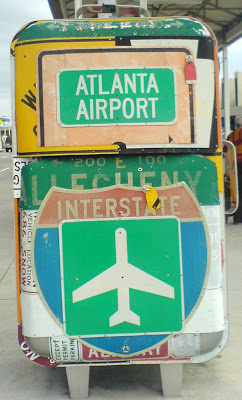 This weekend, Taylor and I have been in Atlanta. He starts training for his new plane on Monday. When we boarded the half-empty plane on Friday, we looked at each other with a cock-eyed face. We realized this was the first flight we’d taken, just the two of us, since our honeymoon. For a couple that flies thousands and thousands of miles, it’s pretty funny that it’s been so long. Oh wait, there was one trip in the Cessna 172 right after he passed his private pilot checkride, but that still was 3 years ago…

We’ve been checking out neighborhoods and apartments, spending some time downtown, spending time with friends, had a BBQ on the Chattahoochee, enjoyed Stone Mountain, saw a hillarious play, finally tried the Waffle House, and today we’ll part our separate ways again. As I laid in bed this morning, I just had such a good feeling. I’m certain that this will be a good move for us. We don’t know exactly where we’ll live, or exactly where we’ll work, or exactly when we’ll move…but it’s right.