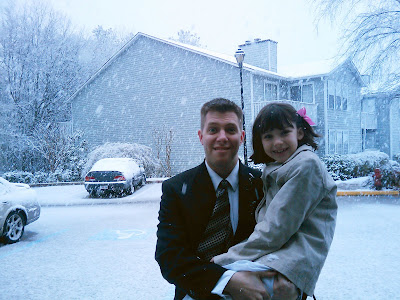 On Sunday, Georgia was slammed with a crazy winter storm. The weekend had been particularly rainy, converting around noon into a wintry mix, into a snow flurry. The snow was at its worst just as we ran out the door to church. Church was canceled after Sacrament Meeting, as well as all meetings for the rest of the day. Rosie and I changed into our pajamas, and Taylor relaxed with us for a few hours. He was called out to the airport for a trip to CLE…but the whole airport was a wreck with delays. His flight was canceled, and he returned home. School was canceled on Monday, and a layer of snow and ice remain in some shady corners today on Tuesday.

After living through TRUE storms in Utah and Idaho, it was a bit humorous watching southerners squirm with the wintry conditions.