There’s something really nice about celebrating Halloween in a place where it’s warm. All growing up, I remember Halloween night being bundled up in parkas or raincoats, covering up my costume….coming home with a bag of soggy candy. For the two years I lived in California, I decided that I preferred warm, sunny Halloweens. We went last year while living in Michigan, and had a great time trick-or-treating through La Verne. When Rosie had a day off school last Friday, I decided to get in a little family and friend time in California.

I pulled Rosie out of school a little early on Wednesday. We drove up to SLC, parked our car, went through security, and made it to our gate just as the plane was boarding. We were assigned seats together, and the flight was just long enough to finish my Entertainment Weekly, drink my Coke Zero, and browse some of the Delta entrainment options. We arrived at LAX around 4:00 pm, and hoped to zoom up the 405 before traffic got too congested. Unfortunately, I went with a super-cheap car rental company, and it took almost 40 minutes for the shuttle to pick us up. At least we had a good view.

I had a handful of problems with our rental car company. First, I’d rented an “intermediate” vehicle…and they wanted to give me a PT Cruiser (my least favorite car to rent, usually rated as an economy or compact) I knew I’d be doing a lot of driving over the weekend, and said I’d wait a few minutes to see if a car I liked better was turned in. A Toyota Matrix drove in, and I was happy with that car. About 35 minutes later, and after an argument over my method of payment (strange online reservation didn’t run my card correctly), I pulled out of the rental agency nearly 90 minutes after landing. By then, it was too trafficky to get on the freeway.

We went to the Trader Joe’s on Sepulveda to pick up $14 of groceries to avoid eating out for most of the trip. Rosie got her California Rolls and mini merengue cookies, and I got my 4-cheese sourdough bread, Popchips, and Sweet Savory and Tart Trek Mix. We drove over to Dockweiller beach just as the sun was setting. We snapped a few pictures and ate some sushi at the beach. 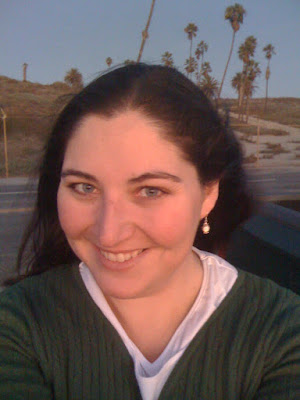 When we got back in the car, the center console of the car had blown a fuse: no radio, clock, A/C power, etc. There was NO way I’d be able to handle a trip without a way to charge my phone on the road, let alone have no access to the radio. We went back into the rental car agency, explained the problems, and waited for them to figure out what to do with me. They said I could pay extra to get a nicer car…I said that was unacceptable. I talked to the manager, and he eventually let me WAIT for another Toyota Matrix to get vaccummed out and ready to rent. As soon as I got in the car and reached for the seatbelt, the plastic casing for the door frame snapped off! I went back to the rental agent, told him I was fine with the broken doorframe, but I wanted to make sure I wouldn’t be charged for the damage. 3.5 hours after we landed at LAX, we were finally on the 405 up to Palmdale.

We stayed with my blogger friend Heather (aka Hizzeather). We’ve been friends online for a year, but only had met in person one other time at her wedding reception. It was so nice to finally have some quality bonding time with her. Between our blogs and Facebook, I feel like we know each other quite well…but it all comes together when you stay up till 2 am in your silly PJs, eating junk food, watching “The Office,” and gossiping about scandalous blogs.

In the morning, Heather’s husband Cody made us some delicious pumpkin pancakes. The we played some games on the Wii, and I have to admit it was nice to play games other than Wii Sports 🙂

Heather and Cody were preparing for their ward Halloween party, so Rosie and I left Palmdale in the early afternoon. We didn’t have anything planned until the evening at our former ward’s Halloween party, so we had some time to kill. I got some advisement from Cybele at Candy Blog for the best places in the San Gabriel Valley to get Japanese candy. First we went to Pasadena, where we picked up a couple things at Japanese-style combini Famina!. We continued down Colorado to Federico’s Bakery. I was introduced to their marzipan princess cake by my dear Lizzie, and no trip to Pasadena is complete without this slice of heaven.

Next, we drove into San Gabriel to Mitsuwa Marketplace. I was pleased to find their sizeable assortment of Japanese candy at a reasonable price. I picked up several hard-to-find flavors of Hi-Chew, Ramune and Mango KitKats, gummies, Pocky, and fizzy candies. I look forward to reviewing these on my other blog, Nicole Rates It.

We spent a little too much time candy shopping, because by the time we reached the freeway it was well into Friday traffic. It took about 75 minutes to get from Pasadena to La Verne. By the end of the drive, we were a little stir crazy.

We immediately raided my mother-in-law’s costume stash, and headed to the ward halloween party. Baked potato bar, costume contest, indoor trick-or-treating to the decorated classrooms, and catching up with old friends and ward members.

Nathan the Villain and Sophisticated Dayna won 2nd and 1st places in the costume contest
I was so tired by the time the party was over, I could barely make it back to my in-law’s couch to sleep (I was running on about 3 hours sleep). In the morning, I met up with Liz for breakfast at Coco’s (sadly, no pictures). I had pumpkin pancakes again….delicious! I then ran a few errands, and then took Rosie and Nevaeh to meet up for tea in San Dimas with our friend Kevin.

After tea, we went back and prepared for the Halloween festivities. Neither Rosie nor Nevaeh were satisfied wearing the same costume trick-or-treating that they wore to the ward party. They dug up some bobby-soxer costumes and modeled them for some pics.

When Taylor’s sister Janelle made it to LV, we drove over to Lissy and Tyler’s to get the twins ready for trick or treating. Eleanor made some adorable witch costumes, that could only possibly have been cuter if they’d kept the witch hats on.

We went trick-or-treating in some of the finer spots in Pomona, including the liquor store and the dollar store.

Fearing for our safety, we collected candy in a residential neighborhood till the twins were exhausted. Afterward, we went back to have some homemade apples cider and sort through the candy treasures.

The last spot for festivities was in Burbank. I met up for dessert with my fellow Keaneheads Elizabeth and Kathryn. I had an assortment of fresh sorbets (lime, tangerine, blackberry) and the others ate decadent chocolate souffle. Rosie said it was the best dessert she’d ever had (and it should have been good….the price wasn’t on the menu and it ended up being $10!) They couldn’t stay long because they were off to a big mid-Singles party. We said our goodbyes and I drove to our amazingly cheap $27 3-star Priceline hotel.

With the daylight savings change, my alarm went off earlier than I’d expected. I was wide awake, and figured I’d just check out and get to the airport. We had planned on the 7:15 flight back to SLC, but made it on the 6:05 am flight just as they were closing the doors. We arrived back in SLC just in time to zoom down to Spanish Fork for church.