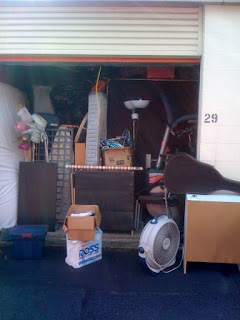 The storage unit in Decatur, GA that has held our earthly possessions since June

When Rosie and I headed out to Utah in June, all we brought with us was what fit into my Camry. We packed pretty creatively, so we haven’t been totally barren. Unfortunately, most of the clothes we brought with us were capris, tees, sandals, and light jackets. Now that it’s Winter, fleece jackets just don’t cut it! We’ve found some amazing finds online and at thrift stores. We’ve received calls from neighbors and family members when they were getting rid of something we might be able to use. But after 6 months of shelling out $100 bucks per month to Public Storage, we knew we had to get our stuff out to Utah sooner rather than later.

Over the past few months, I’ve gotten about 20 different price quotes from traditional moving companies, freight companies, cube storage/shipping, U-Pack, U-Haul, etc. We had chosen a broker called Moving 1 (who we did ultimately use this week) and we told them we weren’t sure when it would happen because we didn’t have the funds to pay yet. Once we got a quote lower than Moving 1’s quote, we asked them to match it. They DID match the total, but not the rate per cubic foot. We had reserved 800 cu ft (10x10x8 storage unit) but they way they scammed us was to only give us 560 cu ft for the $1820. When we used 720 cu ft, we got slammed with a higher price for that “extra” 190 cu ft.

In all, they charged us $3.75 per CF, and $5.75 for the extra CF (when all other CF quotes were between $2.15-$3.00 per CF.) Also, they charged us $530 for packing materials which consisted of 12 boxes and packaging tape, and a “dish packing fee” to put our bagged pots and pans into a box. When the truck was all packed, they movers said that the price was now $3200, not the “binding estimate” of $1800. We then found out was binding for weight…no matter how much it weighed, it would cost the same…but we’d have to pay extra for added volume. While at the storage unit as the movers packed, we tossed out dressers, mattresses, garbage bags full of linens and clothes, etc to make take down the amount of space used. We were supposed to pay half in cash at pick up, and half on delivery. We only had $1100 available to pay, so we have to wire them another $700 before they will ship it out to Utah. Our treasures will sit in a warehouse in Arkansas until we have paid half of the balance. Then we have to figure out the other half upon delivery. Hopefully we’ll get some cash for Christmas.

I have already submitted several comparable quotes I had obtained from various other companies to the manager at Moving 1 (and the “going rate” per CF obviously is nowhere near as expensive as Moving 1). I’ve also spoken with the manager of the dispatching trucking company to request an itemized bill for packaging materials, and will get rates from other movers to see how much our crew overcharged us. If the trucking company doesn’t help resolve this fiasco, we can go to small claims court over it. If we win, we’ll only have to pay about $200 out of what we recover. I am willing to fight, because I have no other choice.

With all of our interstate moves over the last 5 years, we’ve had varying luck with companies. We had something similar happen to us when we moved from California to Michigan, and luckily my in-laws bailed us out. Our Utah to California move was spot on with ABF U-Pack, and I wish we’d gone with them again. Our Michigan to Georgia move was fairly close to the estimate, but the movers took so long to move it out that we talked them into hiring a crew to unpack the truck for us for free. I’ll post an update on what happens with the GA to UT move as soon as we have any answers.