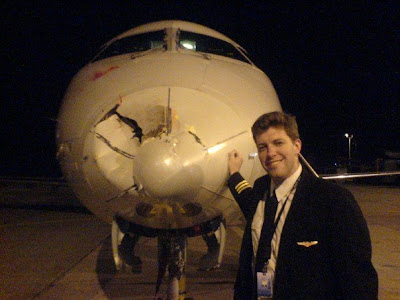 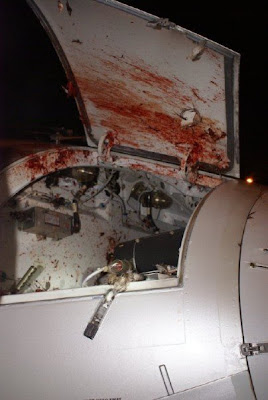 Yesterday was Taylor’s first flight out of O.E. training. He was on reserve for the day with a three-day trip planned for Tuesday. He got called in for a quick out-and-back to Wausau, Wisconsin. It was a cold, snowy day in Detroit…but after an hour and a half of de-icing they took off no problem. But as they came in for the landing approach, Taylor and the captain saw a flash of birds. Within half a second, a group of ducks crashed into the plane. They lost control of the nose wheel door and lost hydraulic system 3. It smashed the radome, went through the nose cone, then the radar, then the bulkhead, ending up in the forward avionics bay. Warnings and error messages were flashing, and luckily they were able to get down the landing gear before the hydraulic system bled out. Passengers snapped pictures of the plane after deplaning on the tarmac. It was one of those “once in a career” moments…and it was on Taylor’s first flight out of training.

Any witty comments for his pictures?