Why it pays to be a fan of live music… 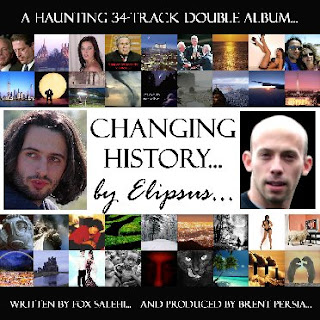 From the time I saw New Kids on the Block in concert in 1990, I’ve been a huge live music fan. I like the big shows…the massive, glittering production numbers that are all over the globe, to the little unknown coffeehouse troubadours. I love to support new acts, as I’ve found that the ones that you support from the beginning are going to always be grateful as they progress in their careers.

Last week, I attended two shows at Borders (Ann Arbor and Brighton) for an up-and-coming pop/rock/new wave artist named Fox, of the band Elipsus. He is out promoting his is double-disc album, “Changing History,” and will be performing at 150 gigs across the U.S. while he relocates from Buffalo, NY to LA. He found me on Facebook, and I agreed to support him at his shows because he didn’t have any other confirmed fans in Michigan. The played mostly his original stuff and covers of some of my favorite songs:

During the show, I was telling Rosie how fun it would be to sing along, since he was doing so many of my favorite songs. She went up to Fox during applause and told him I wanted to sing. So I got to sing along to Keane, which meant I had my Borders debut at the Ann Arbor flagship store. After buying one CD, he signed it for Rosie and pulled out another for me for free for my birthday. He was a wonderful performer, and I hope to help promote him at some west coast shows in Utah and California this spring.

On his Myspace bulletin, summarizing the shows of the last week, he posted this…

DETROIT… the downtown show was saved by you, Nicole. The night show in Brighton was just sweet. A wonderful, wonderful memory. Lots of album sales, the store was awesome and bought a ton of them… thanks to my dearest Nicole, way way way too attractive to handle, and such a dear supporter of my music. Thanks! And to Rosie, my youngest and most adorable fan, thanks so much! I love both of you, and Brighton in general!

So here I am…about to promote the next big thing…who thinks I’m “way too attractive to handle.” Not bad to be unattainably adored by a rockstar. He he he.