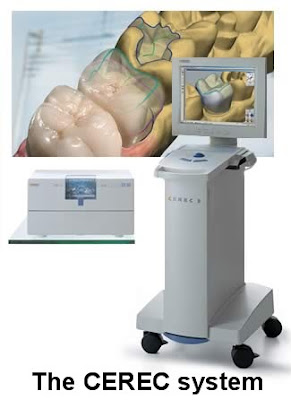 DON’T LET YOUR DENTIST FOOL YOU!!!!
As many of my blog readers know, I’ve had some pretty terrible experiences with my teeth. From my early years, I dreaded visiting the otherwise lovely Dr. Edvalson from church because I knew the visit would end up in bad news, pain, and unhappy parents who couldn’t afford the fillings. I’ve had some pretty hellacious dental visits in my 28 years, but today took the cake.

I went to my new office in Canton today, as recommended by my coworker. I explained the last 8 months of my dental history, including which teeth had been worked on, pain, sensitivity, and rough edges. He looked in my mouth for less than a minute, and looked me in the eye and said “I’ve got some bad news.”

He came to explain that all of the teeth that I’d opted to have CEREC work done on were done incompetently. The two teeth have have been pushing me toward the Vicodin bottle for the last month were full of decay, and would need a root canal ASAP. The CEREC material was breaking off in chunks, and as I held up the mirror as he scraped…I knew he was right.

For those not familliar with CEREC, it is a dental restoration product that uses 3D technology and CAD/CAM to make a tooth replacement that does not require a dental lab. When I was deciding between CEREC and other crown substances, I was talked into the CEREC because I was told that it will last several years longer than ceramic fused to metal. It can supposedly be done in one office visit, but for some reason I always had to come back for a second visit. CEREC should be used with discretion, as not all patients are good candidates, especially on molars. It also causes a lot of tooth sensitivity, which I’ve been experiencing for months.

When I had the work done last fall, I had a lousy HMO plan, but the feel schedule said I should have been paying approximately $400 for the crown and buildup per tooth. But for some reason, they kept saying that I was required to pay an extra coinsurance on top of that. All the work ended up being around $2000. I talked to my dental HMO several times, and they told me that it was basically up to the discretion of the office to determine the coinsurance amount. That should have been my first red flag.

Another gripe I had with the office was that I knew I had several teeth that needed work, but very little time till I was moving out of state. In once terrible visit, I was subjected to nearly 5 hours in the chair, being shot, drilled, and bonded in all four quadrants of my mouth. I had asked to have only the most VITAL teeth worked on, and they took the liberty of starting every tooth in one visit. I left the office with a 2 year repayment plan and a majorly bad taste in my mouth.

So here we are…needed a mouthful of work done again, still paying off my shoddy work, and having the worry that my new insurance companies (I’m double covered now) may deny the work because it is less than 5 years old (*#%^*&!!!)

My new dentist suggests that I get the Michigan Board of Dentistry, California Board of Dentistry, and an attorney involved. He said that a reputable dentist would take accountability and refund the work and help cover the cost of restoration, but I have a funny feeling they’ll hire their own attorney and find a way to blame it on me. It’s going to be an expensive, painful, time-consuming and messy hassle!