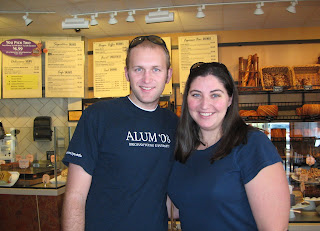 Last Saturday, I met up with my cousin Thomas for breakfast in Orange County. He was the winner of my blog giveaway…which gave me a great opportunity to get “caught” up with him. He’s a few years younger than me, and I don’t know him as well as his older sisters Alaina and Jillian. When I lived in Oregon, he lived in Arizona. Then he moved to Oregon, and I moved to Utah. He recently graduated from BYU and moved to California with his wife this summer. His wife’s parents live in Michigan, but we missed them on their trip here a few months ago. So this breakfast was my chance to “catch” the infamous Thomas.

A funny story about Thomas: I was at the SLC Olympics Medals Plaza for the Barenaked Ladies concert in 2002. I went with my sister, and a guy caught my eye…smiled really big….and ran over and gave me a hug. He was obviously very excited to see me. He looked vaguely familiar, but I couldn’t place him. So I played along and chatted for a few minutes, racking my brain with recognition for who I was talking to. Then Mary said, “Aren’t my cousin from Oregon?” and it hit me! It was Thomas! I hadn’t seen him since a trip to Oregon in 1998. In those 4 years, he’d gotten so tall and good looking. I can’t remember if I told him at the time that I didn’t recognize him right off, but the memory makes me laugh.

Can you tell we’ve both got the Watson baby blues? 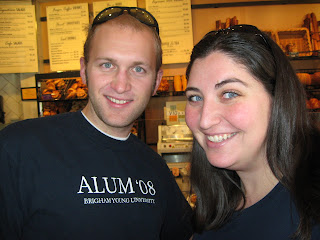