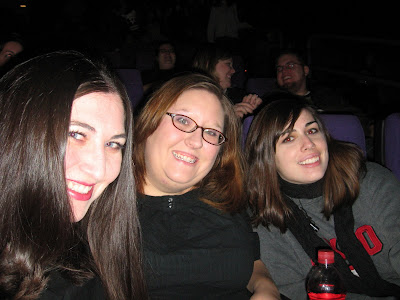 Last night, I grabbed my two best friends in Michigan, and went to see “Twilight” for a Girls’ Night Out. Husbands stayed back and watched the kiddos, the soundtrack was a-blasting in the car, and we were ready for some hot vampire action. We stopped by the store first, grabbing some drinks and candy to smuggle in. Hillary (middle) and Erin (right) had never actually met each other, but Hillary recognized Erin, and I think they made fast friends. After the movie, we had appetizers and dessert from Chili’s, and stayed up way past our bedtimes. There’s no way I could have survived my time in Michigan with these ladies. Here’s a little about my ladies:

Hillary lived in the apartment next door to me. She is the only neighbor who came over to introduce herself in the whole time I’ve lived here. She has a deliciously adorable daughter, and Rosie loves to dote over. We both dealt with Absent Husband Syndrome for the first half of the year, as both men had to constantly travel for work. We kept up on American Idol together (although she voted for the wrong David) She moved a few blocks away in the summer, but we still saw each other all the time. She needed some extra cash, and I needed someone to flexibly watch Rosie on the days Taylor was on a trip. She was so sweet…she offered to let us stay over for dinner almost everyday that Rosie was at her place. We are both movie/music nuts and love to stay abreast of all the latest new releases.

Erin got to see my husband a lot more than I got to see him in 2007. Her husband Mike was Taylor’s bunkmate at Jet U for 5 months last year, so we both suffered from Absent Husband Syndrome. When they both started working at DTW, Taylor lived on their couch for next-to-nothing for three months. Erin graciously kept a stiff upper lip when he was hard to live with, and let him stay much longer than originally anticipated. We met last November on the weekend I flew out from California to find a place to live. We ended up living within walking distance of each other. We share the same obsessions of Trader Joes, creative crafting, Keane, blogging/LJing, and the fresh organic produce. It was tough to have get-togethers for both of our families because Mike seemed to typically work the opposite days of Taylor. She’s attempted to teach me to knit, and I still owe her a sewing lesson. We share the same pain of being drowning in debt from our husband’s careers, and living of their anorexic paychecks. I introduced her to the Twilight series, so we’ll always be connected through vampire blood. 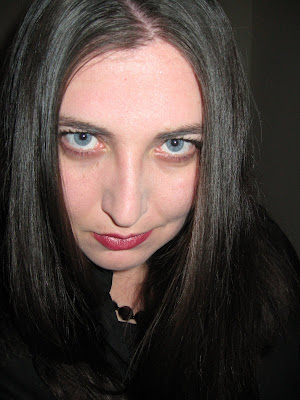 Speaking of vampire blood, didn’t I pull off the vampire look pretty well to see the movie?