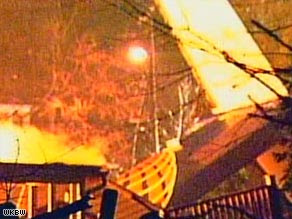 On my usual too-early morning wake-up today, I quickly caught wind of the crash of a Dash 8 Q400 plane,Colgan flight 3407 – operating for Continental Connection. The plane crashed at 10:20 pm yesterday, 5 miles before their destination airport of Buffalo (which is an airport my husband has flown to many times.) The full report is here on CNN.

This crash, which killed 44 passengers, 4 crew, and one person on the ground comes only weeks after the U.S. Airways Miracle on the Hudson, where no fatalities occurred. For some reason, as “miraculous” as the U.S. Airways splash-landing was, I wasn’t as emotionally affected. I am glad that all passengers were safe, and the crew did a fabulous job in an emergency situation (which is why it annoys me that everyone calls it a miracle). But I think why I’m feeling so much sadness over the crash tonight is that it happened in the area of an airport my husband flies to, in a plane of similar capacity as my husband’s, with employees from a company my husband’s company owns (Pinnacle Airlines Corp purchaed Colgan Air in 2007, but don’t let me even start on that acquisition).

The causes of the accident will be under investigation by the NTSB for a while, so only speculation can be made at this point. I was reading the Aviatrix‘s take on the accident, which includes a trancript of the ATC recordings. She gives a much better summary of the situation than I ever could.

In less than a month we’ve seen the ultimate in triumph and defeat in the skies (within only a few hundred miles). My heart goes out to the families affected by the crash.

Addendum 2/19/09 : Some have misunderstood the intent of my comment about US Airways 1549 from my blog. I have read several news stories that have put a very strange spin on the story, which have made it seem that any other pilot, save Sully, would have caused a disastrous crash. This is not so. I know that my husband has received excellent safety training through his airline. He is nowhere near as experienced as Sully, but I have faith that MANY pilots in commercial aviation would have had the capacity to land the plane safely. The emergency procedures were expertly exectued, and I do believe God’s hand was active in the sucessful splash landing.

I’m absolutely pro-miracle, but I think credit does need to go overall to pilots who have safety procedures and flows so ingrained in their muscle memory that they would have the capacity to save lives. My husband was involved in a birdstrike that nearly required a belly landing, but he and the captain followed the safety requirements and successfully landed with no injury. Unfortunately, Colgan’s flight resulted in the worst case scenario…but I have faith that the pilots and crew members who perished were on top of their game – following safety procedures a best they could in an impossible situation.