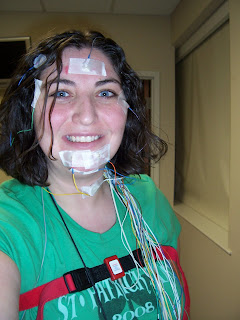 All hooked up last week

Yesterday afternoon I had the quickest doctor appointment of my life. I arrived at the office about 4:10, and I was back to my car by 4:25. Seriously??? When does that ever happen. I only had to pay $1 for parking instead of the usual $5 (which by the way is really lame to be forced to pay for parking when you’re already paying your doctors. The joys of living in an urban metro area)

The bad news is that there wasn’t a lot for the sleep doctor to report about my polysomnography test from last week. He had ordered the CPAP version; but even after a clearly marked written order (and a lot of arguing on my part), the sleep tech only gave me an NPSG test (for new patients). Dr. I said that he hadn’t yet dictated my whole report, but that my sleep structure was almost identical to my last test in 2007. Approximately 10 disruptions per hour, similar oxygenation, similar REM sleep time, mild-to-moderate snoring (which Taylor doesn’t agree with. haha) Dr. I was really upset that I basically had the test for nothing, and he promptly got on the phone with the director of the Sleep Disorders Center at Piedmont Hospital to make sure that I don’t get billed for the erroneous study. Dr. I apologized to me profusely, he waived my copay, and set me up for the CPAP study in his VIP suite at Georgia Lung Center in Austell in March (longer drive, but nicer facility and it includes breakfast)

I wonder if I had refused the study the night of, which I was tempted to do, if I wouldn’t have gotten in my car accident last week.