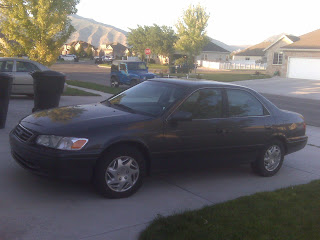 I’m really attached to my car.

Last week, Camarillo the Cali Camry (Or Cami for short) hit 150,000 miles. I felt that it would be an opportune time to give an ode to my dear vehicle. We met in 2007 in Orange County. I’d been a Honda Girl who went to the lot originally scoping out Accords. After an unimpressive test drive, I decided against purchasing a particular Accord, and decided to browse the lot a bit more. Tried a Jetta with a shimmy. Quickly played with the idea of a small SUV….and then I saw a pristine looking Camry. I quickly knew it was for me, it drove well and was exactly in our price range. We signed on the dotted line and drove her home to La Verne. I was a little nervous buying her so quickly, as I hadn’t sold my other car yet, but things quickly worked out with the sale of the Fittle.

Her name, Camarillo, comes from a town in Ventura County, near where Taylor and I went on our honeymoon. When he was in his flight training, we took a day trip and flew out to Camarillo for dinner. It was such a fun experience to fly over southern California and point out the freeways and landmarks, and have the sun set behind us over the ocean on our way back.

Cami and I have traveled much of the country together. In our two years, we’ve driven through California, Nevada, Arizona, Utah, Wyoming, Colorado, Nebraska, Kansas, Iowa, Illinois, Indiana, Ohio, Missouri, Michigan, Kentucky, Tennessee, Georgia, and South Carolina. She’s worn license plates for California, Michigan, and Georgia (and possibly Utah soon.) She’s driven through temperatures from -15 degrees to +115 degrees, through wind, rain, sleet, snow, hail, blinding frozen fog and scorching heat. She’s seen gas prices from $1.43 to $4.80 per gallon. She forgives me when I don’t wash her often enough. She’s taken me to stores, churches, concerts, schools, parks, restaurants, family and friends’ houses… as well as many, many trips to airports. She’s been filled to the gills as we moved from California to Michigan, then to Georgia, then to Utah. She kept me comfortable and safe on my commutes to Montclair, Ann Arbor, and Emory. Her speakers have blasted my favorite music through them. We’ve spend a LOT of time together. Over 40,000 miles in 26 months.

Of course, she isn’t without her quirks. When I purchased the car, I was only given a valet key, which means I can’t open the trunk without popping the latch. The brake light on the dash has been wonky since the day I started driving it to Detroit. The cigarette lighter adapter has been broken for months. It has a rusty scar by the rear driver side wheel from when it was wounded in a Good Samaritan attempt. And last week the moulding on the passenger side started coming off. But I love her still.