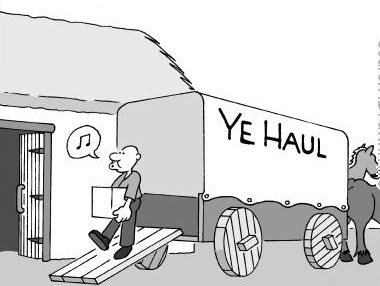 Today is moving delivery day. Or it was supposed to be.

Earlier this month, we decided to have the movers bring our stuff, despite the contract issues and having no idea how we’d pay the balance. I asked how quickly it could get there…Rob said cross-country transit usually takes 3-5 days (which to me is reasonable.) I told him we’d have the money on payday (Jan 16th), and he said they’d plan on delivering it the week of the 18th.
I talked to Rob last Monday, the 18th. He said our stuff would be there by Thursday, Friday at the latest. He promised to call by Thursday to give our firm delivery time. I called back and talked to a receptionist about acceptable forms of payment. She said certified bank check was fine, but they took credit cards and money orders as well. My dad agreed to lend us the money, found a bank branch open on the MLK holiday, and got the certified check ready for us.
Thursday came and went. Delivery didn’t happen. No call from Rob.
I called Friday morning. Rob said he’d get in touch with the dispatcher and call me back within 30 minutes. He didn’t call me back. After a few more calls near closing time, the receptionist finally let me talk to him. Rob called the truck driver. The truck was in Texas, would be dropping a shipment in Colorado on Sunday, and would deliver our stuff in Utah “first thing Monday morning.”
Sunday night around 9:00 PM, the driver Alex called us. He said that he would be delivering between 11 am and 2 pm, and to have payment in postal money order ready. (HUH?) I told him that the moving company advised us that certified check was acceptable…he said that I’d have to take it up with the moving company.
I called Moving 1 right when they opened this morning. Rob discussed methods of payment, and he said that Moving 1 has NEVER accepted a certified bank check for delivery. I advised that I called last week to verify, and was given incorrect information. Rob said, “If the driver gets to your house, and you try to pay in certified check, he’ll just turn around and drive away.” I looked at our contract, and sure enough…only acceptable payment on delivery was postal money order.
At that point it was 7 am, and we had about 4 hours to figure out payment before the delivery window. My dad (who is wheelchair-bound, btw) was preparing to leave on a business trip. We explained the situation, and we knew the only way we could fix the payment was to have him physically come to the bank to cash the check. Taylor drove up from Spanish Fork, and my dad drove down from Lehi, and they met at a Provo branch to cash the check. Taylor took the cash to the post office, got the money orders, and hurried back home to be there for the movers at 11.
Our 11 am to 2 pm window passed. No movers. We called the Moving company – they had no clue. We called the truck driver – no answer. As we were stewing over what to do next, the truck driver called. He said that his truck broke down “een esalta laka seety.” (in Salt Lake City) If he could get the truck fixed, he’d be there by 6 pm. If not, he’d come “first thing in the morning Tuesday.”
At 6:15, the driver called. He can’t come to “The Espanish Fork” tonight. He will come at 8 am tomorrow. We shall see.
At this point…I’m at a loss for words.
***
As for the dispute with the BBB, the moving company representative did respond to my complaint. It was written by Donna, the claims adjuster, poor grammar and all:
“First we would like to apologize for the inconvenience the customer may have sufferred during her move. However, we do not increase any shipment size or cost unless the customer has more items. Which means that even if we were mistaking in the estimation of shipment size, but the items list were the same, we would not have charged her more. We find it a little rude that the customer is only listing the increase in charges but not listing any of the adjustments that Rob the “rude” manager has authorized.
“Rob has authorized a charge for 750 at the same rate initially quoted to the customer which resulted in a discount of $378.00 discount. The customer shipment size was estimated by other companies the same 560 cu.ft. just like we have because of the list of items the customer provided. She also sent us copies of estimates she received which were for more than 500 cubic feet only. so to say we were the only ones is just wrong.
Furthermore, if the customer wasn’t just looking for bottom line price when comparing quotes she would have been able to pay more attention to details. We are very sorry the customer is not completely happy but trust our above explanation sheds some light over the REAL move details.”
I am composing my rebuttal as we speak…
It is true that when I sent my complaint to the BBB, Moving 1 had made no price concessions other than giving us “free” storage (while we came up with the the extra $$$ they overcharged us). After the complaint was submitted, I finally made some headway with Rob (see THIS post). I’m not sure what Donna was talking about when she mentioned the other estimates I submitted for comparison. (the ones submitted were for a 2 bedroom apartment, and for 760 cubic feet…nothing lower than the 560 CF we got from Moving 1.) The quote I am primarily concerned about is the one they “matched” from Bravo Movers…the 760 CF quote for $1820. The quote that would have saved us much of this hassle, had we dropped Moving 1 when we had the chance.
I am now working with a company called www.moverescue.com. Not sure if anything can be done at this point, but I’m not giving up yet.