Skip to content
For the first time in 7 months, we have a full house. 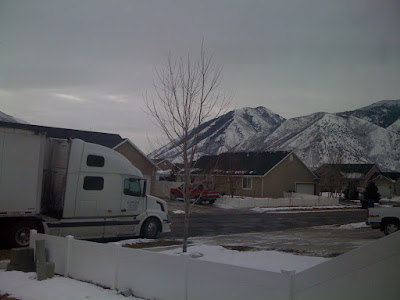 Despite all the lies and disappointments, I have to admit that I was really excited when the moving truck pulled up in front of our house at 8:00 am Tuesday. Sure, it was a month later than we’d originally anticipated, but it did come. After 7 months, I’m pretty sure my heart did grow fonder. 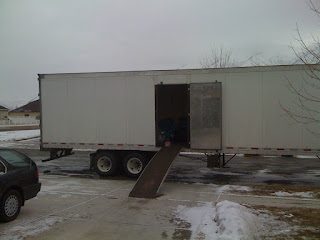 When we moved out of our Atlanta condo in June, our stuff went into a very cramped 10X10 storage unit. We had to wait a few months for shipment (because we’ve been so tight on money) Our stuff was picked up 6 weeks ago, and finally made it to Spanish Fork yesterday. For a little perspective, our belongings took up the majority of space from the ramp to the end of the truck. Somewhere around 10 feet, and only about 25% of the truck. What a joke. We ended up having to pay $2900 instead of $1820. 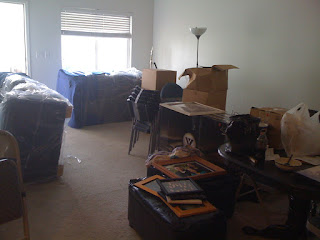 Putting the house back together has been a bit of a pain (actually a lot of a pain in my back). Taylor’s first order of business was setting up the TV and entertainment components. I went for the boxes, bags, and crates of clothes. We only had a few hours to unpack before he had to leave for the airport, but we got a lot accomplished in those hours. 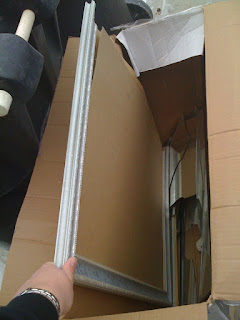 We did have some casualties with a few of our items. The above frame is from a large fancy mirror that broke, and we also lost the framing elements of one of my favorite Japanese prints. My saddest loss? The beheading of several of my Willow Tree statues. We’re going to attempt a claim on our broken items, but I’m not holding my breath. 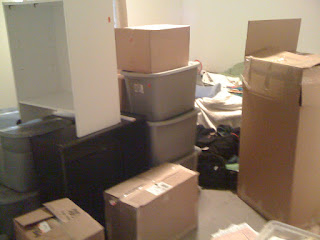 As much as I have hated living out of boxes and suitcases the past two years, I have to admit that I really love having ALL my belongings in the same state; my linens, my dishes, my movies, my tech items, and my clothes! That hasn’t happened since 2003. Other than a short anxiety attack, the unloading process was pretty standard.
Now to find help Unpacking.