My husband and I are certifiable music junkies. We probably have about 600 CDs between us, dating back as far as 1992 (where I got my first 2 cds on my 12th birthday: MC Hammer and Amy Grant) When we started dating, at least once a week he’d make me a new love song mix CD. By the time we got to our first anniversary, he’d made me 17 custom-made love mixes. We used to burn lots of other mix cds for each other, but we haven’t done much since I got my Ipod and he got his Zune. Usually we just transfer files between our computers with a flash drive. Back when Taylor finished his private pilot license, I decided to surprise him with a specialty mix CD, just for him. I simply called it “FLY,” in celebration of his aviation accomplishments. I ran across the CD a few days ago when I was cleaning, and thought I’d post a list of some of the songs on the disc:

Learn to Fly – Foo Fighters
Fly Away – Lenny Kravitz
Fly – Sugar Ray
I Believe I Can Fly – R Kelly
Learning to Fly – Tom Petty and the Heartbreakers
Fly Me to the Moon – Frank Sinatra
Fly – Dixie Chicks
Flying High – Jem
Flying – The Beatles
Fly Like and Eagle – Steve Miller
The Fly – U2
Vole – Celine Dion (It’s French for fly)
Danger Zone – (technically it doesn’t have fly in the title, but come on…Top Gun!)

What other FLY songs can you think of? I just found a website with EVEN more FLY songs! And for even more trivia, which above song’s music video has this picture in it? 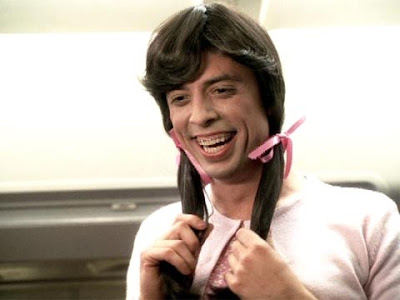