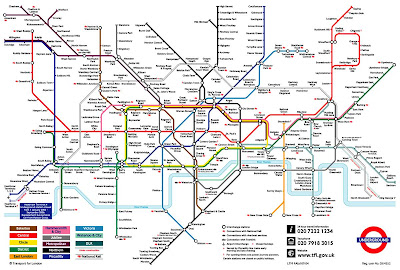 This is the map to the Underground. If only more cities had a system this organized…

The tube kept us from having to drive around and make sense of all the roundabouts and people driving on the other side of the road. I probably would have killed us if I just drove out onto the road here.

Friday morning we did a lot of walking around. We were hesitant to use our cell phones ($1.29 per minute, $.50 per text) so we looked for a place that we could get breakfast and wifi. After not finding any other suitable options, we hunkered down at a Starbucks for about an hour. I got in touch with Emma and we made lunch plans. She and David would pick us up from the Croydon station, which was within the 1-6 Travelcard zone. We took the tube back to Victoria Station, and onto the overground train to East Croydon station. Unfortunately, the ticket agent unknowingly sold us a 1-2 zone Travelcard. When we tried to exit the Croydon station, the gate wouldn’t release and we had to go to the “unpaid fare” window. The agent said we’d have to pay a twenty pound penalty each, but we talked her into just selling us the fare between Victoria and Croydon.

The first pub we went to was on a friends’ reccomendation, but when we arrived they said they didn’t have license for children to enter. Since Annabelle was with us, we asked for another suitable local pub. We drove to the Sandrock Pub. I got fish and chips with mushy peas, Taylor got bangers and mash. We had a lovely time visiting, and were sad we had so little time to spend with them.

David, me, and Emma

When they dropped us off at the train station, we totally flubbed on social ettiquite. We uncultured Americans just aren’t used to those friendly cheek kisses! We’ll get it right next time! We took the train back to Victoria, and spent the afternoon sightseeing.

First we went to the Science Museum. We knew we only had a few hours to spend there, so we focused on the medicine and aviation floors.

Taylor was in airplane heaven!

For the next few hours, we did lots and lots of walking. We walked to Hyde Park, and it started to rain a little bit. We were blessed to have excellent sunny weather for the majority of the trip, but it wouldn’t have been a true experience without some rain.

Trying my hand at some funky artistic photography

By the time we got the the Serpentine, it was raining pretty heavily. We took turns with the one umbrella we had, and both ended up pretty wet.

Next we walked to Harrods was so posh, which is one of the most fabulous department stores in the world. I felt silly walking around in my sopping wet clothes. We toured the several departments, but especially loved the food halls, It. If I’d wanted to pay 5 pounds per kilogram of eggplant, approximately $15/lb, this would have been the place.

Ah, the sweet confections that I dilligently avoided buying (but I did get a free hazelnut truffle. Yum!)

We walked around for a few minutes, but it was starting to get dark, and we didn’t feel like staying out in the rain, so we took the tube back to Hammersmith. 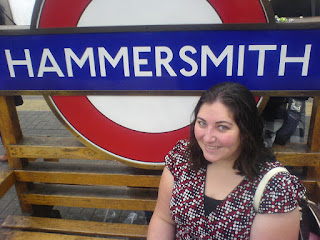 We stopped at the Tesco market in the tube station and picked up sandwich fixings for dinner. We watched Zombieland after dinner, as well as some BBC. We had a pretty exhausting day, and decided to call it a night around 10:30 pm.